A BEER AND A BITE AT THE BREWER & BUTCHER

A front-row seat overlooking the Atlantic Ocean and the only restaurant in town with a craft microbrewery – the Swakopmund Brewing Company (SBC) – right in the middle of the restaurant, the Strand Hotel Swakopmund’s the Brewer & Butcher is one of the go-to eateries for the coastal resident or visitor looking for an experience sure to please the palate. With the prospect of beer tastings on arrival as well as a brewmaster or two always on site and keen to discuss all things beer, the Brewer & Butcher is the exclusive seller of SBC beers, and the food and drink destination for beer connoisseurs and intrigued newcomers alike.

The SBC microbrewery was established in the Strand Hotel in 2015 and its very first brew, a crisp Helles to be specific, was in enjoyed in August of that year. The SBC brewers, who undergo training according to German beermaking processes, base their creations on the German Reinheitsgebot (Purity Law) which identifies hops, barley and water as the main ingredients for beer brewing. However, unlike large commercial breweries that adhere to fixed recipes, the microbrewery is a playground for the brewers where they can explore and play with different flavours. SBC Brewmaster, Ronn Rittmann, who started as an apprentice in 2009, puts his overseas training into practice every day and shares his knowledge of international beer cultures and appreciation. He is now most excited to further develop the distinct Namibian beer culture and cultivate a richer craft beer culture in particular.

By popular demand, the Brewer & Butcher has three or four beers on tap, typically their dry, yet refreshing Helles; the sweeter, malty Märzen; and the fruitier Weiss beer. Besides these regulars, the brewers are more flexible with their other offerings throughout the year, which may range from a Bock beer to a Champagne beer; German to Belgian; to beers varying in added botanicals.

Always in pursuit of more interesting and original ways to enjoy their craft beers, the Brewer & Butcher has created a range of beer cocktails to let their beers’ crisp, bitter undertones sing alongside fresh flavours. These beer cocktails include a Helles Mojito, Beer Tini, Ginger Beer, Beer Jelly Baby, Beer Cosmos and a Beer Sunrise – a fun take on a Tequila Sunrise.

While these beer options can be enjoyed on their own, the experience can only be heightened with the addition of something to eat, and with a variety of beer and food pairings on the menu, the Brewer & Butcher proves that wine need not be the only companion of good food. Few beverages complement a succulent Schweinshaxe (pork knuckle) as well as a Märzen beer does, and for the vegetarians at the table, the Veggie Burger and a refreshing Weissbier make for the perfect pairing. The chefs go a step further to bring the depths of flavour of the specialty brews to the meals by using them as star ingredients too. Spiced lamb shank cooked in beer, beer butters or gravies as accompaniments, or a stout ice-cream to round off the meal, are just some of the products of the kitchen’s explorations.

Whether looking to enjoy a pure, golden brew; try a new hops-inspired cocktail; or tuck into a hearty meal with a cold one on the side, the Brewer & Butcher has something to entice the taste buds and quench the most discerning of thirsts. 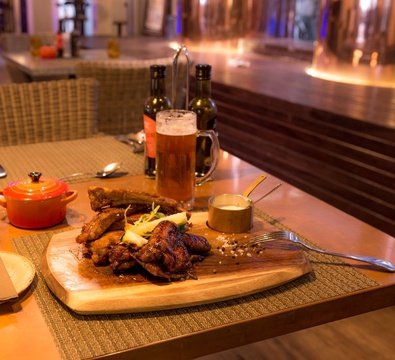