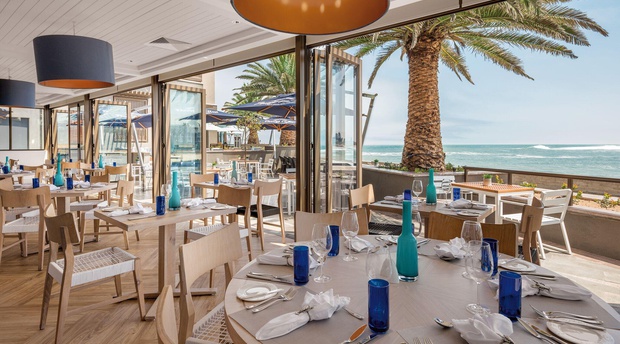 Boasting four restaurants and an ice cream parlour each of which have been seamlessly woven into the very fabric of Swakopmund’s social scene, Strand is that special place where tourists and locals come together in a lively clash of terrific travel adventure and daily Namibian life.

After you’ve been checked in by the hotel’s unfaltering friendly staff followed by the gastronomic lay of the land, the inherent challenge is easy to accept.

Loosen your belt buckle, get some fresh Atlantic Ocean air and eat at each hotel restaurant before your stay is over!

To begin your unofficial food tour at the top of the morning, drift into Farmhouse Deli.

If there is a more lavish local breakfast spread, there is a heaven. If not, Farmhouse Deli serves and takes the cake.

Open from 6am and the haunt of locals popping in for a cup of Slowtown coffee after a jog, languidly indulging in the breakfast buffet or tucking into a full English breakfast a la carte with their families, this delicatessen, wafting smooth jazz and overlooking the sparkling Atlantic, is the place to settle in for an instantly good morning.

Once breakfast is over and you’ve returned from a dune adventure or the sea, Brewer & Butcher is your next food tour treat and a place to unwind.

No less than a large German-inspired steakhouse with an ocean-facing terrace, nighttime fire pits and the Swakopmund Brewing Company’s microbrewery producing traditional Helles and Märzen on site, beer lovers would be remiss not to take a load off, pull up a bar stool and enjoy some seriously enticing beer pairings.

If juicy cuts of free range meat and ice cold beer aren’t your thing, an after adventure alternative is Strand Hotel’s Welwitschia Lounge.

Here the Hampton’s style living is easy and to eat there are bierhappen - sticky pork belly bites glazed in soy sauce, honey and chili, smoked bratwurst skewers, beer battered onion rings with smoked garlic mayo and cheesy bacon fries – replete with an outdoor ambiance just begging for a coconut and cranberry mojito or something sparkling from each of the hotel restaurant’s extensive wine lists.

The barmen, bless their souls, take requests, cocktails with names like Coastal Breeze, Sizzling Desire and Purple Volcano light up the daily specials board and a variety of cakes and pastries are available if the mood is more high tea than naughty.

Lounging done and dusted, it’s always a treat to head to the beach.

The large expanse of ocean and soft sand far below Swakopmund’s iconic red  and white lighthouse which one can reach after a slow stroll along the promenade and past Strand Hotel’s quirky Café Mole.

Named for the solid sea wall separating Strand Hotel from the ocean, Café Mole is a 50’s style ice cream parlour where the cheese burger is the tasty bestseller and swirls of  vanilla soft serve atop golden brown waffles are a close second.

Popular for French fries, hotdogs and sushi takeaways as well as scoops of mint, tiramisu, Stracciatella and chocolate ice cream, Café Mole is your cheerful, turquoise penultimate food tour stop before or after working up an appetite playing volleyball, swimming or taking photographs at the beach.

For sun-downers - drinks had at sunset - Ocean Cellar Oyster and Wine Bar is your fifth and final unofficial Strand Hotel food tour location.

Wash the sand off your feet, put on something somewhat special and head to this sparkling, contemporary fine dining restaurant for your fancy of fresh sushi and sashimi at its purple lit show kitchen, oysters baked, natural or as part of their wonderfully novel World Oyster Journey as well as delicious posh fish and chips, a Louisiana style calamari po’boy, fish chowder, sesame and pepper tuna, misoyaki linefish and prawn picchi pacchi.

This is where your food tour ends, night begins and you’ll sit back with a satisfied sigh having watched the light fade and the Atlantic calm, savouring the taste of Strand Hotel.

View
We can't wait to welcome you back

Dear Travelers, due to recent developments, all our properties, restaurants and spa’s will be on lockdown for 21 days. The safety of our guests and staff is our first priority. Be assured that we will use this time to enhance the experience. Our beautiful properties will welcome you back with even more excitement and activities and our true heartfelt Namibian hospitality.
Until then, please stay safe and stay home, so we can enjoy
Namibia together soon. For those who have made bookings in this time, kindly contact the following departments to postpone your booking: